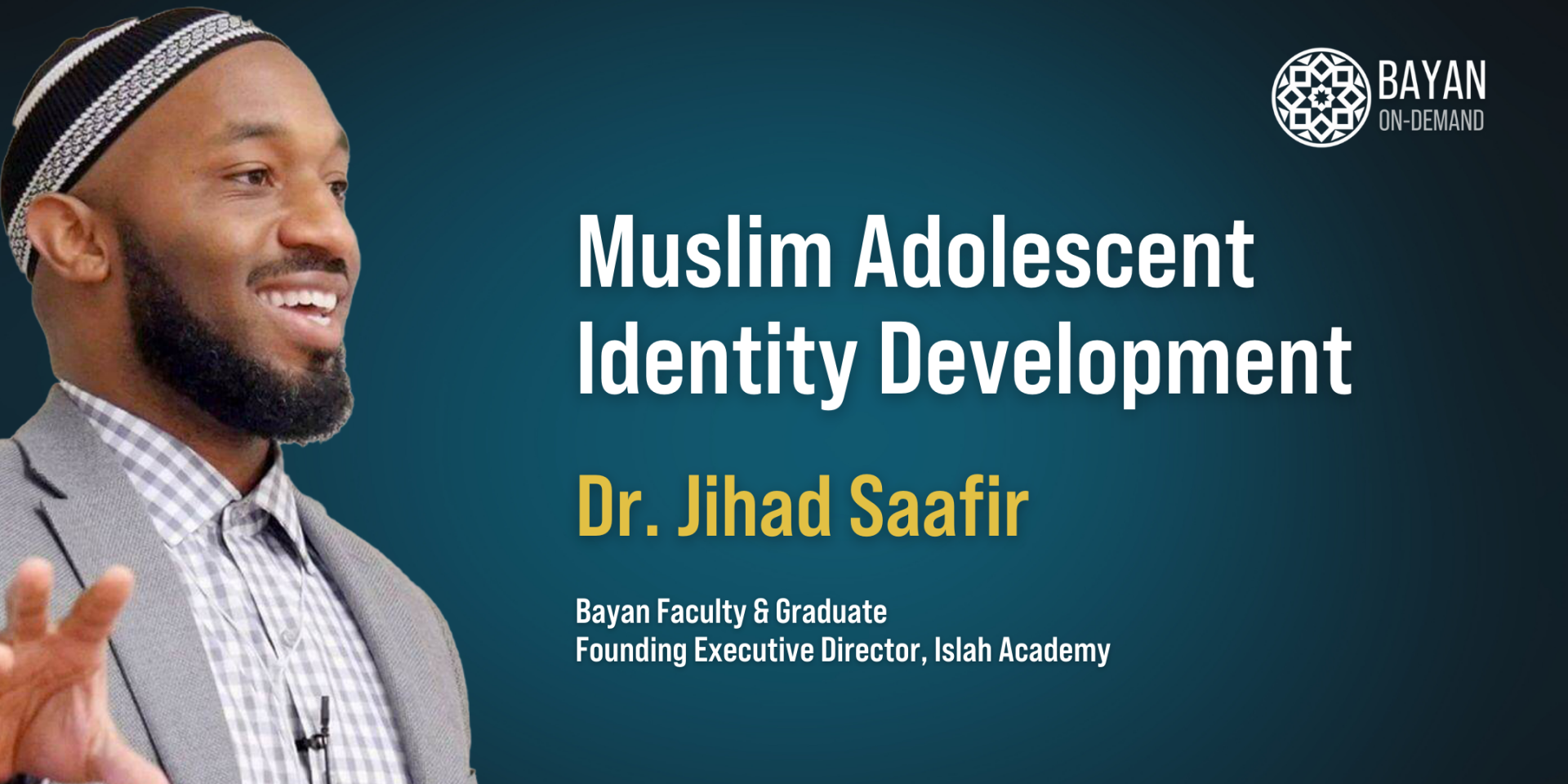 Course Overview
This course will equip students with an understanding of adolescent development and how identities, in particular religious identities, are adopted, supported, and neglected. Furthermore, students will explore the various environmental factors that impact Muslim adolescent identity development. A recurring theme throughout this course is that the survival of one’s religious identity hinges on socializing agents (community members, peers, Muslim parents, Muslim teachers, etc.) that are well equipped to construct environments that foster healthy transitions into adulthood.
Patrick Jones - Course author
MEET THE INSTRUCTOR

Dr. Jihad Saafir is the resident Imam and the Founding Executive Director of Islah Academy in Los Angeles. He is a 2014 graduate of Bayan Islamic Graduate School and serves on the faculty.

You will learn about the following topics:


You will learn about the following topics:

This course is divided into a series of Modules, each containing recorded lecture videos, quizzes, and related information.

Course readings and handouts may also be available for download. These materials serve as background reading and resources related to the course content.

Use the navigation buttons to proceed through the sequence of course modules. You can always re-watch a lecture in this entirely self-paced course. Take the optional quizzes to check your learning.

Dr. Jackson received his Ph.D. from the University of Pennsylvania and has taught at the University of Texas at Austin, Indiana University, Wayne State University and the University of Michigan. From 1987 to 1989, he served as Executive Director of the Center of Arabic Study Abroad in Cairo, Egypt. He is the author of several books, including Islamic Law and the State: The Constitutional Jurisprudence of Shihâb al-Dîn al-Qarâfî (E.J. Brill, 1996), On the Boundaries of Theological Tolerance in Islam: Abû Hâmid al-Ghazâlî’s Faysal al-Tafriqa (Oxford, 2002), Islam and the Blackamerican: Looking Towards the Third Resurrection (Oxford, 2005) Islam and the Problem of Black Suffering (Oxford, 2009), and most recently Sufism for Non-Sufis? Ibn ‘Ata’ Allah al-Sakandari’s Taj al-‘Arus (Oxford, 2012).

The main course book is:

Please find selected additional readings for the course (articles and book sections within fair use parameters) in the Downloads section on the right.

Please provide the following details to register for our April 18th event.
Thank you!